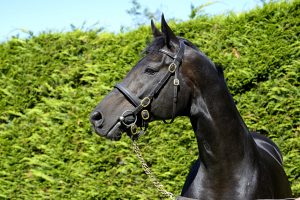 A front running ride proved just the trick for JEN’S BOY (Malinas), as he gained his maiden win in the Novices’ Handicap Hurdle at Uttoxeter on July 26th.

Second over two miles and seven furlongs last time out, he was sent off favourite under Nico de Boinville, who rode him to lead in the colours of Middleham Park Racing. Ridden approaching the final flight, he stayed on gamely to beat Court Affairs by a head, the pair finishing 33 lengths clear of the rest of the field.

Denied his bumper win by a nostril last season, Jen’s Boy becomes the fourth winner bred by WB McTaggart out of Friendly Craic. A £65,000 store purchase by his owners with Highflyer Bloodstock, he is a half-brother to Grade 2 winners Royal Regatta and Three Musketeers.