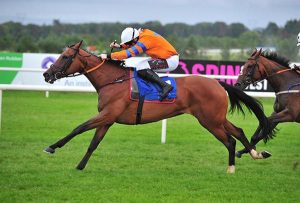 FLYING RISK led home a 1-2 for SHIROCCO in the two mile fillies’ bumper at Limerick on July 25th.

The Gordon Elliott-trained newcomer tracked the leaders for much of the way and was travelling well when asserting over a furlong from home. Pushed out in the closing stages by Jamie Codd, the bay held off a late run by Majestic Maid (Shirocco) to win by a neck, with the front pair finishing six lengths clear of the favourite in third.

Codd was full of praise for the winner, commenting after the race, “She’s a lovely filly and the Fogarty family are going to have a lot of fun with her. She’ll improve for that but ran as straight as a gun barrel, which was impressive for a four-year-old filly making her debut.”

Bred by Donal Fogarty and owned by John Fogarty, Flying Risk is the first foal out of her dam and comes from the family of Suny Bay.